In part of one this two-part blog series, we discussed the recent study by Forrester Research outlining the economic impact of Macs in the enterprise. The study showed that while the initial purchase price of a Mac is $500 more than a comparable PC, its true cost is actually $50.25 less over a 3-year product cycle once hardware and software costs are accounted for. The disparity in costs is even more pronounced once supporting costs such as provisioning, deployment, help desk tickets and energy are factored in. Forrester found the resulting cost savings to be $678.56. In the end, TCO matters far more than the initial price tag. 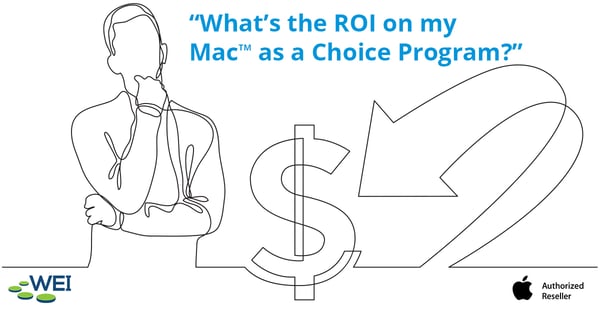 In part one of this two-part blog post, we outlined some of the substantial savings that seven companies realized in provisioning and support costs after allowing their employees to transition to Macs through recently implemented employee choice programs. The appreciated cost savings was experienced from many other facets as well though.

For instance, a Mac requires less energy to operate, 50 percent to be exact. Not only does that mean lower energy costs per device, but it also means greater productivity as users can operate on battery for longer periods of time. Decreasing the dependency on power cords means that work can get done whenever and wherever it needs to.

PC users are used to waiting. In fact, PC users spend 5 minutes per day just waiting on tasks such as wake or reboot. Compare this to Mac users who only spend 1 minute per day. All in all, the study went on to show that Mac users regain 48 hours of improved productivity per year. Now multiply this recapture of time by the average hourly wage of your employees. Then multiply that figure by your number of employees. Forrester goes on to estimate that organizations comparable in size to those that participated in the study can expect 10,000 users to choose Macs the first year of the program. This is based on a 10 percent transition rate the first year, which increases to 20 percent and 30 percent in years 2 and 3 respectively. In business, minutes can quickly compound into serious savings.

The productivity gains realized by Mac conversion is due to more than just reduced startup times however. Because the hardware and software operate in seamless cohesion with one another, the machine operates better, thus reducing employee frustration and nonacceptance. It also improved employee engagement which led to improved retention rates. In fact, employees who chose a Mac showed a 20 percent improvement in employee retention rate compared to their fellow PC users.

This recognized boost in productivity has been found elsewhere too. In an article published in ZDNet in November of 2019, IBM, after implementing a Mac program four years prior, realized a savings of $543 per Mac compared to a PC (a figure very similar to the Forrester Study). They also found that Mac users tended to close sales deals that were 16 percent larger on average than Windows users. Mac users were also 17 percent less likely to leave IBM. No one will debate the expensive cost of employee turnover.

No article comparing computer platforms would be complete without mentioning security. According to benchmark research conducted by the Ponemon Institute in 2018, the likelihood of a data breach within an organization is 14 percent per year. The Forrester study showed that this likelihood was reduced by 50 percent per device when switching to a Mac. One of the study participants noted they had as much as 90 percent fewer security incidents on their Mac devices. The Mac has a fundamentally more secure architecture than the PC thanks to its T2 security chip that provides the foundation for encrypted storage and secure boot capabilities.

While the Mac is more secure, logic says that the increased level of security should cost more. Again, not the case. The Mac’s security first architecture and included security features negate the need for some of the additional endpoint security licenses that are required for comparable PC deployments. The Forrester study reported a savings of $40 per year, per machine in additional endpoint security licenses. Better protection at lower cost. Apple certainly has their own way of doing things.

It is rare that a product that so many crave has a lower cost of ownership. By implementing an employee choice program, you can please your employees that embrace their preferred brand, as well as the bean counters that keep track of the nickels and dimes. Except we are not talking about nickels and dimes—we are talking about hundreds of dollars per device. Macs breed happiness, loyalty and heightened productivity, all for less money than comparable machines that exhibit lower benchmarks across the board. Give your employees the choice they want and give your company the ROI it demands.

Questions about implementing a Mac as a Choice program in your company? As an Apple authorized reseller, WEI can help. Learn more about our experience and the white glove services we provide by reading our Apple Services brief below, and contact us to start a discussion.