What is Composable Infrastructure? Why should I care? 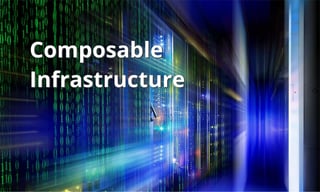 Today’s IT Manager has to walk a tightrope. Management is saddled with the inherited role of supporting the traditional data center that remains built around an inflexible hardware-based infrastructure. At the same time, management and market pressures are compelling them to try to and transform this rigid environment into a modern data center—designed around flexibility, operational velocity and borderless adaptation. It is a quandary of duality that IT teams frustratingly have to deal with.

The good news is that there is a new infrastructure architype that can greatly simplify the struggle of managing these two competing and opposing worlds. That new model is called Composable Infrastructure. So what is so special about this new standard?

It allows you and your team to service your users—any workload, anytime, anywhere—at the designated service level they require. All of this, while reducing both capital and operational expenditures.

The Natural Transition to Composable Infrastructure

When we look back at the map of how we arrived here, we find that composable infrastructure is the glue that melds together all of the architypes we have been implementing over the past fifteen years that always had some type of shortcoming.

IT personnel no longer have to use a multitude of tools and interfaces to manage the data center using a single API.  Admins can now configure and modify any element within their on premise or hybrid environments. Through this single API approach, composable infrastructure allows you to provision, update, inventory and troubleshoot your entire IT environment through a single interface. Provisioning is performed using a single line of code. Tasks are now template driven and fully automated. All of these benefits culminate in bringing down operational costs and frees up valuable labor time that can be directed at valued generating projects, rather than the mundane drudgery of mindless firmware updates and migrations.

In summary, composable infrastructure is about unifying your environment into a single unit that is optimized for efficiency, productivity and flexibility. It is the glue that ties everything together and will serve as the liberator that IT has been eagerly waiting for in order to lead their organizations to greater opportunities in a digitized world.

NEXT STEPS: Get to know this next generation data center solution by reading our white paper, Orchestrating Composable Infrastructure - 6 Ways to Ensure Operational and Financial Harmony. 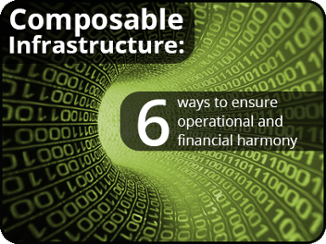